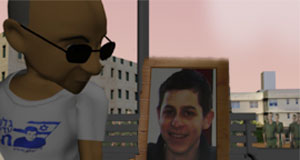 The Al Qassam Brigades, the armed wing of Hamas, released a 3D video about the captured Israeli soldier, Gilad Shalit, and stated that the video carries several messages to the Israeli people, mainly that Shalit will never be released unless Israel agrees to a prisoner-swap deal. The Brigades said that this message is meant for the Israeli society, not the Israeli leaders and ministers, and added that Israel’s officials only care about themselves and their own interests, and that they are the ones obstructing a prisoner-swap deal.

It also said that this video is a warning message that the prisoner-of-war, Shalit, will face the same fate of Israeli pilot, Ron Arad, who went missing after his plane was downed over Lebanon in 1986, and his whereabouts were never revealed since then.

Yet, the video also sends a message that there is hope, and that the Israel has a chance to secure the release of Shalit in a prisoner-swap deal that meats the demands of the resistance, and warns that should Israel keep its preconditions “Shalit will never be released”.

The video also shows Israel forced to instate a ministry dedicated to its prisoners of war as the Brigades would continue to abduct Israeli soldiers to trade them with Palestinian detainees.

The Al Qassam Brigades To Broadcast A Message To The Israelis

The Al Qassam Brigades, the armed wing of the Hamas movement, stated that it intends to broadcast a message to the Israeli public today, Sunday.

The Brigades did not reveal details regarding the intended message but it will likely be about the captured soldier, Gilad Shalit.

Israeli Prime Minister, Benjamin Netanyahu, recently demanded Hamas to release Shalit without any preconditions and linked easing the siege on Gaza with the release of Shalit.

The Brigades said that a prisoner-swap deal mediated by Germany was at hand but Israel foiled all efforts by rejecting the demands of the resistance.

Egypt mediated indirect swap talks and its Intelligence Chief, Omar Suleiman, tried to facilitate a deal but in vain.

The resistance demands Israel to release 1000 detainees, including those sentenced to high terms, and senior military and political leaders.