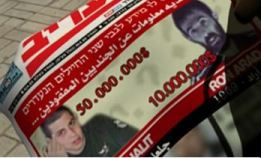 Israeli Prime Minister, Benjamin Netanyahu, slammed the Islamic Resistance Movement, Hamas, for releasing an a short animating video about the captured soldiers Gilad Shalit, and described it as an irresponsible and “despicable action” by the group.Netanyahu added that this video shows that real nature of Hamas, and accused the movement of not responding to an Israeli offer for a swap deal.

But Hamas has presented its list including the names of 1000 detainees it wants released yet Israel rejected it as it is. Hamas is demanding the release of political and military leaders imprisoned by Israel.

The Shalit animation was released by the Al Qaasam brigades the armed wing of Hamas and not by its political leadership.

The Brigades also wanted to send a message to the Israelis that Shalit could face the same fate of Ron Arad, an Israeli military pilot whose plane was downed over
Lebanon in 1986 and his whereabouts were never known since.

The animation includes the real voice of Shalit taken from a video released in September of last year.

A senior source of Hamas said that the movement wanted to send a message to the Israeli public more than it wanted to reach Israel’s leadership.

The source added that Shalit could be set free should Israel accept to pay the price and release Palestinian detainees.

On its website, the Al Qassam Brigades said that Israel is holding captive some 10.000 Palestinian detainees, and that refusing the demands of the resistance for a prisoner-swap lead to the abduction of more Israel soldiers.