Two Sisters Killed, Their Dad and Brother Wounded After Soldiers Ram Vehicle Into Them 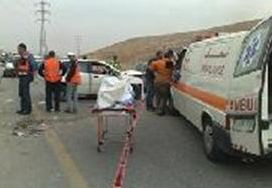 Palestinian medical sources reported Wednesday that two sisters, aged 8 and 10, were killed while their father and brother were wounded after Israeli soldiers rammed their jeep into them in Al Baida area, in the Jordan Valley.The sources stated that Foqaha’, 8, and her sister Masa, 10, died instantly while their father Imad, 40, and their brother Hussein, 11, were moderately wounded.

Local sources reported that the family was on its way back home after farming their land.

The father was driving a tractor when a speeding Israeli military jeep rammed into it, flipping it over.