Four Killed, Nine Wounded, After Being Gassed In Tunnel By Egypt 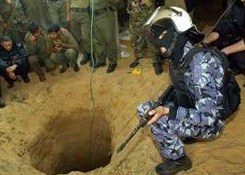 Palestinian medical sources in the Gaza Strip reported on Wednesday evening that four Palestinians were killed and nine others were wounded after the Egyptian security forces sprayed a border tunnel with Gas. The sources identified the slain residents as Mohammad Abu Jamous, 25, his brother Osama, 22, Khaled Al Ramly, 20, and Nidal Al Jady, 20, while nine residents were wounded.

The Palestinian Ministry of Health in Gaza confirmed that the four were killed after the Egyptian border police sprayed a tunnel with toxins, and denied reports that the tunnel was detonated leading to the death and injury of the residents.

Adham Abu Salima, media correspondent of the Military Medical Services in Gaza, slammed the Egyptian Authority and stated that this act violates the International Law and the basic principles of human rights.

Abu Salima added that instead of being part of the siege on Gaza, Egypt must act to open all border crossings and allow the entry of the urgently needed medical equipment and medications.

He also stated that Egypt must allow the patients to be able to enter the country for medical treatment, and should allow the entry of basic supplies into the coastal region.

The Egyptian authorities stated a wide campaign against all siege-busting tunnels in the Gaza Strip, detonated several tunnels and sprayed other tunnels with toxins and with waste-water.