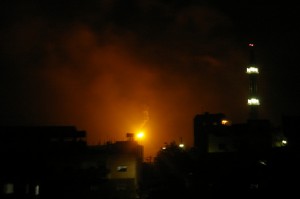 The Palestine Solidarity Project reported that undercover forces of the Israeli army kidnapped on Sunday evening six children in Beit Ummar town, near the southern West Bank city of Hebron, and handed them to the army. Mohammad Awad, spokesperson of the project, stated that clashes took place near Karmie Tzur illegal settlement, installed on Palestinian lands that belong to the residents of the nearby Halhoul town.

The undercover forces, dressed as Palestinians, drove into the town in a White Ford Transit carrying a Palestinian license plate, and kidnapped six children, aged between 13 and 16.

The forces then hurled several stun grenades and fired tear gas bombs into the narrow streets of the town and drove away.

Awad stated that it is believed that the kidnapped six youth were taken to the Karmie Tzur settlement.

One undercover soldier was hit in the head by a stone hurled by one of the protestors during clashes with the invading forces.

On Sunday evening, a number of fundamentalist settlers of the Karmie Tzur settlement held a demonstration at Highway 60 and attacked several Palestinian villagers of Beit Ummar.

The police arrived at the scene and used loud speakers to order the villagers back to their homes and fired tear gas and stun grenades at them instead of removing the settlers.

The army is using excessive force against the villagers who are protesting the illegal settler-takeover of their land and the destruction of dozens of trees.

The Palestine Solidarity Project reported that Israeli soldiers were filmed in recent weeks while beating attacking journalists. Also, a 10-year-old child s shot with a rubber coated bullet by soldiers from Karmie Tzur.