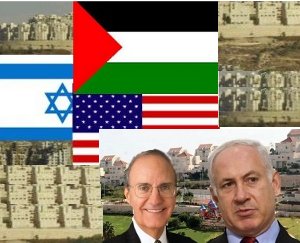 The Indirect Palestinian-Israeli talks, mediated by the United States, are set to start this coming Wednesday. Israeli Prime Minister, Benjamin Netanyahu, will be heading the talks on the Israeli side, Israeli Ynet News reported. Hamas slammed decision, called for unity and reconciliation between all factions, Arab support.The talks are mediated by United States Special Middle East Envoy, George Mitchell. He will be landing in Israel shortly after the meeting between Netanyahu and Mubarak.

The Ynet stated that Yitzhak Molcho, the political aid of Netanyahu, will be joining the Israeli negotiations team while other advisors could join if needed. Netanyahu will also be holding consultations with seven senior members of his cabinet.

The Israeli Prime Minister is hoping that Egyptian President, Hosni Mubarak, could grant him guarantees to promote the talks, and to ensure the that Israel’s security interests are met under any deal.

He also wants the period of indirect talks to be as short and possible in order to move to direct talks with the Palestinians.

Netanyahu will be heading to Egypt while keeping a low profile and trying to avoid the press, and will be holding talks with Mubarak focusing on proximity Palestinian-Israeli peace talks.

He will likely discuss the issue of tunnels along the Gaza-Egypt border and what is believed to be threats by Islamist groups against Israeli tourists in Sinai.

But despite all efforts to resume the stalled talks, several main obstacles remain intact; mainly Israel’s ongoing illegal settlement activities, its violations against the residents and their property in Jerusalem, and its well-known stances regarding the future of peace talks.

While demanding the Palestinians and the Arab world to recognize Israel as a Jewish State, Israel refuses to recognize the legitimate demands of independence, the Right of Return and refuses any talks on East Jerusalem.

Israel also refuses to hold talks over borders, natural resources and insists on continuing the illegal constriction and expansion of Jewish settlements.

In an Interview with the Al Ayyam Palestinian paper, President Mahmoud Abbas, stated that he will demands Israel to withdraw from vast areas in the occupied West Bank, including from the Jordan valley.

Israel said it will not accept any preconditions for the talks, yet it refuses to halt its attacks against the Palestinians and their homes in East Jerusalem, and is ongoing with its violations and unilateral measures.

Hamas leader, Ismail Haniyya, stated Sunday that the Arab countries must support internal Palestinian reconciliation talks and not proximity talks “between the Fateh-led Authority and Israel”.

Haniyya added that while Israeli declares plans to expel the Palestinians from their lands, and while it declares construction plans for illegal Jewish settlers, the Arab Follow-up Committee grants Israel another chance of talks.

He stated that these talks will not be different that earlier talks and will not present anything new to the Palestinians.

“The alternative to negotiations is internal Palestinian talks, Arab support for national reconciliation”, Haniyya stated, “The Arab world must support the steadfastness of the Palestinian people, talks with Israel only increase the suffering of the people living under occupation and facing ongoing siege, invasions and attacks”.