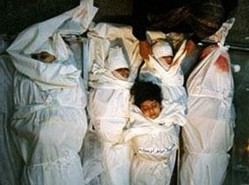 The International Solidarity for Human Rights Foundation (ISHR) issued a report on Monday revealing that Israeli soldiers killed in April eleven Palestinians, including two children, in the West Bank and the Gaza Strip. Six were killed in the West Bank and five in the Gaza Strip.In Tubas, near the northern West Bank city of Jenin, two sisters ages five and six, were killed after a speeding military jeep rammed a tractor they were riding with their family.

In Ramallah, a 21-year-old young woman identified as Samar Radwan, 21, was killed in a hit-and-run accident carried out by a Jewish settler.

Resident Mohammad Oleyyat, 62, died of a heart attack after being forced to wait at the Al Hamra roadblock, near Tubas. He carried French citizenship and was visiting relatives in Tubas.

In Beit Awwa, near the southern West Bank city of Hebron, soldiers assassinated Ali Imsail Sweity, 45, after surrounding his home and demolishing it while he was inside. He was a member of the Al Qassam Brigades of Hamas movement and topped Israel’s wanted list for several years.

Residents Marwan Al Jarba, 25, Wael Abu Jalala and a third unidentified resident were killed in armed clashes with Israeli troops invading Jabalia in the northern part of the Gaza Strip. They were members of the Quds Brigades, the armed wing of the Islamic Jihad.

Resident Mohammad Salim, 24, from Al Shujaeyya, was killed in an Israeli shelling, while resident Ahmad Salem, 19, also from Al Shujaeyya was shot and killed after the army opened fire at a nonviolent protest against the so-called “security belt” Israel is enforcing in Gaza.

The ISHR stated that soldiers kidnapped 285 residents in April during different invasion and attacks, and escalated their violations against the residents and their property in occupied East Jerusalem as dozens were kidnapped during protests against settlements in Silwan town and in the Old City.

Among the kidnapped were 26 children and two women identified as lawyer Shereen Isawy, 29, from Jerusalem and Halima Shawamra, 58, from Doura near Hebron.

Isawy was kidnapped at a roadblock while returning from the headquarters of the International Workers Movement for the Defense of Children, in Sheikh Saad neighborhood in East Jerusalem. She is active in defending human rights and the rights of the detainees.

Shawamra, 58, was kidnapped in Doura and was taken as a hostage after the army broke into her home in an attempt to push her “wanted” son to surrender.

Also in April, soldiers and Israeli policemen kidnapped dozens of Palestinian workers in Israel for entering and working in the country without “valid permits”.