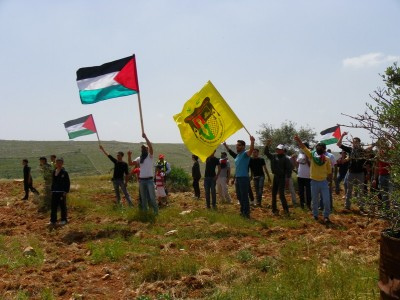 When their apartment in Hebron was broken into on Saturday May 1st, the international solidarity activists stationed there said they have strong evidence that it was the Israeli military that carried out the illegal robbery.They say that they were suspicious that this was not a regular robbery because laptops, video cameras, and flash drives were stolen – but not cash and credit cards that were left in the apartment.

Similar items were taken by the Israeli military when they twice raided the International Solidarity Movement (ISM)’s office in Ramallah in February of this year.

ISM activist Beatrice Smith said, “It seems likely that this was Shin Bet [the Israeli Intelligence Service]. Our neighbours have told us twice in the past week or so that soldiers have been coming up to our apartment when we’re out and they’ve been looking through the windows. If it was a normal robber, why would they have left cash and credit cards, but taken USB sticks and memory cards? This person wanted information, not money”.

The robbery follows a recently released affidavit from Shin Bet to the Israeli High Court of Justice. In it, they admit that they have been keeping close surveillance on ISM activist Bridget Chappell, seemingly for the past several months.

Smith says, “It is clear from the surveillance and arrest of our activists, from the previous raids on our office in Ramallah, and now from the break-in here in Hebron that the Israeli authorities are determined to do all they can to stop us working here. They know that we’re non-violent, but they are scared because they don’t want the outside world to know what they are doing here. Anybody who comes here to bear witness to the occupation is a threat to them”.