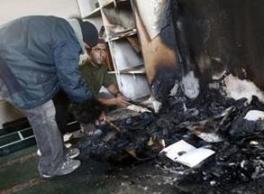 A group of fundamentalist settlers torched the main mosque of the Al Lubban Al Sharqiyya village, south of the northern West Bank city of Nablus.
Jamal Daraghma, head of the Al Lubban Village Council, stated that the settlers attacked the mosque approximately at 3 A.M, rounded up several copies of the Holy Koran in one place and set them ablaze.

Daraghma added that the mosque is located in the center of the village which is surrounded by three settlements built on %30 of lands stolen from the residents. The village, 22 kilometers south of Nablus, is inhibited by 3000 residents.

He stated that the village is subject to frequent attacks carried out by the settlers who previously set ablaze farmlands and uprooted trees.

Local sources reported that the residents woke up on sounds of destruction and sounds of vehicles before they notices the torched mosque.

Eyewitnesses confirmed seeing several settler vehicles driving in the village and speeding out of it after the mosque was set ablaze.

The mosque was totally torched, some fifty copies of the Holy Koran were burnt and its walls and ceilings became cracked with significant parts of its ceramics falling down.

Its 450 square meters of carpet, eight air conditioners and seven fans were burnt too and its electric wiring was fully sabotaged.

This is the third mosque to be torched by the settlers this year as the settlers torched a mosque in Yasuf village near Salfit and another mosque in Huwwara town, near Nablus.