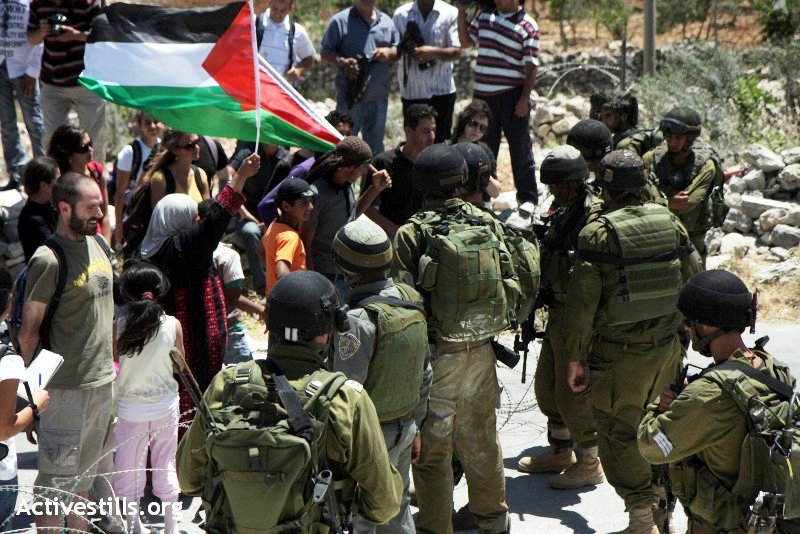 Israeli troops injured three Palestinian civilians and detained three others on Thursday during an anti wall protest at Al Walaja village near the southern West Bank city of Bethlehem.
At around 8:00 am villagers of Al Walaja along with international and Israeli supporters tried to stop military bulldozers from uprooting olive trees to make way for the wall construction.

People managed to stop bulldozers by forming a human chain in its path. Israeli troops used pepper spray and batons to move the protesters away; three villagers were injured.

Troops also detained three Palestinian protesters; Dr. Mazin Qumssiya, member of the Popular Committee Against the Wall and settlements in the nearby town of Beit Sahour in addition to two bothers from Al Walaja Diyya and Nafith Hamdan.

Israel resumed work at this section of the wall last month. Villagers say the army bulldozers had uprooted 100 olive trees owned by local farmers so far. Some of those olive trees date back to the Roman Era, farmers added.

The Israeli army forced Al Walaja villagers in 1949 out of their village that use to be located inside the Green Line. Villagers moved to what was left of their lands located between Bethlehem and Jerusalem.

In 1967 Israel annexed the new village to Jerusalem but the residents were not granted Israeli IDs. Moreover the military do not give residents any permission to build homes or public facilities.