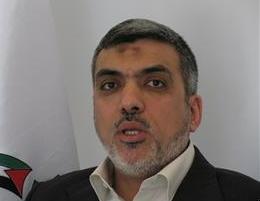 Ezzat al-Resheq, Hamas political bureau member, stated that the Wednesday tripartite summit that brought together Russian President, Dmitry Medvedev, Syrian President, Bashar al-Assad, and Hamas’ Political Bureau Chief, Khalid Mashal, proves that Hamas is an important party that cannot be ignored.Al-Resheq stated that this meeting holds a significant importance as this is the first meeting between Medvedev and Mashal, and proves that Hamas is an influential party that cannot be ignored or alienated.

The Hamas official further stated that Hamas encouraged Russia to play a more important role in Middle East peace in order to counter the American role that sides with Israel.

He added that imposing sanctions on Syria is an idea pushed by the United States and Israel, and a policy that proved to be wrong, and unaccepted by the International Community.

Al-Resheq stated that the Russian President stated during the meeting that Hamas is a national liberation movement and an important group that cannot be sided.
During the meeting, Mashal thanked Russia for its stance against the Israeli siege on Gaza, and the Russian efforts to bring it to an end.

Mashal also told Medvedev that Hamas backs national reconciliation between all Palestinian factions, and that the United States played a significant role in voiding any chances of national unity.

He also accused Israel of obstructing prisoner-swap talks, and added that Hamas does not want to keep the captured prisoner-of-war, Gilad Shalit, captive but is interested in freeing the Palestinian detainees imprisoned by Israel.