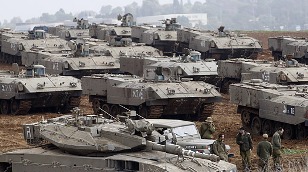 Several senior Israeli military leaders and leaders of the military police held a meeting recently to prepare scenarios for a possible reoccupation of the Gaza Strip and appointing a “military governor” should Israel decide to redeploy its army in the coastal region.Israeli Maariv reported on its website that the army prepared plans and agendas for a possible full occupation of the Gaza Strip should the security situation witness further deterioration as Israel’s military leaders believe that a war could take place with Syria and Lebanon in addition to the Gaza Strip.

The paper added that appointing a military governor includes dealing with daily issues involving the residents of Gaza while at the same time the military police will be taking control over the Gaza Strip.

The Israeli army said that Israeli cities could be attacked by missiles from Gaza, Lebanon or even by Syria in addition to armed resistance in the Gaza Strip should the army invade Gaza. The army is closely observing the armed factions in Gaza and their weaponry.

Furthermore, the army added that the current weapons in Gaza do not pose a real threat to the Israeli army should it decide to invade it and impose full military and security control.