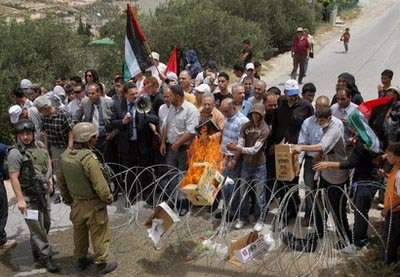 Israeli settlers groups called on the Israeli government to stop proximity talks with the Palestinians due to the settlements products boycott campaign that started today in the West Bank.

The Campaign “House-to-House” was launched by the Palestinian National Pride fund. Hundreds of Palestinian men and women started on early Tuesday morning to go from house to house in all Palestinian communities in the West Bank to raise awareness about the settlements products and encourage people to stop using them. The campaign is endorsed by PM Salam Fayyad and President Mahmoud Abbas.

Palestinian farmers, local made dairy products, and soft drinks industry will be one of the major benefiters of the settlements products campaign.

In total Palestinians consume up to $500 million of settlements products per year, according to Palestinian officials. The products range from nuts to construction materials.

“We do not take care about the comments by those occupying settlers, those have stolen our land and our natural resources, and we believe that settlements built on our lands are illegal, and they have to evacuate those settlements sooner or later, originally the peace process is based on ending the occupation and removing settlements.” Ghassan Al Khateeb, director of the Palestinian Government Press office told PNN.

The Palestinian-Israeli proximity talks mediated by Washington started last week. The talks faced obstacles due to the Israeli government’s policies towards settlement just one day after it started. Proximity talks are expected to resume this week. There are 1/2 a million settlers living in West Bank settlements and east Jerusalem. According to international law all those settlements are illegal.