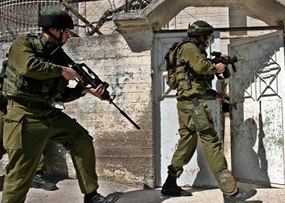 Israeli soldiers kidnapped, on Thursday, at dawn several Palestinian children, aged 16-18, in al-Suwwana area, near the walls of occupied East Jerusalem.One of the kidnapped is Eyad al-Shalaby, the son of senior Fateh official in Jerusalem, and the rest were identified as Tamer Abu Gharbiyya, Ahmad Aslan, Ali Abu Gharbiyya, and Majdi Abu Ghazal, the Maan news agency reported.

Omar al-Shalaby, secretary of the Fateh movement in Jerusalem, stated that the soldiers broke into the homes of the youths and kidnapped them before moving them to al-Maskobiyya interrogation center in West Jerusalem.

Al-Shalaby added that some of the kidnapped were supposed to celebrate school graduation this day.

Dmitri Diliani, member of Fateh’s Revolutionary Council, said that the arrests carried out just before graduation from school are a deliberate act aimed at depressing the youth.

He added that such arrests are also meant to impose psychological pressures on the youths and their families.