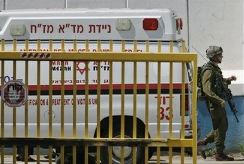 Israeli military sources reported Friday evening, that one soldier was shot and wounded by Palestinian sniper fire near Khan Younis city, in the southern part of the Gaza Strip. The condition of the soldier was described as moderate.The wounded soldier was moved to the Soroka Hospital in Be’er Shiva. The incident took place near Kibbutz Nirim in the northwestern Negev, close to the Gaza border.

Israeli daily, Haaretz, reported that the soldier is a tracker working for the Givate Brigade, and that he was shot in the same area where fighters had attempted to infiltrate earlier on Friday.

On Friday at noon, the Israeli army shot and killed two Palestinian youths in the area, and claimed that they were on their way to attack Israeli targets.

Israeli Yedioth Aharonoth reported that the soldier was shot by two rounds in his shoulders and received medical treatment on the spot before he was moved to Soroka hospital.

The Salah Ed Deen Brigades, the armed wing of the Popular Resistance Committees, claimed responsibility for shooting the soldier, and added that the attack comes in retaliation to the ongoing Israeli crimes.

The Israeli army advised residents of settlements near the Gaza border to remain in their homes, and deployed additional troops in the area.

The al-Quds Brigades, the armed wing of the Islamic Jihad, stated that its fighters exchanged fire with Israeli soldiers invading al-Faraheen area, in Khan Younis, and that one soldier was wounded in the clashes.

On Thursday, the army fired missiles at a tunnel located one kilometer away from the borer. The army claimed that the tunnel is meant to be used by Palestinian fighters to infiltrate into Israel.