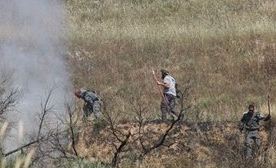 A group of fundamentalist settlers torched, on Saturday, several farmlands in Wad al-Maleh in the northern plains of the Jordan Valley in the occupied West Bank.The torched lands were planted with wheat and barley.

Eyewitnesses reported that the Palestinian firefighters arrived at the scene and prevented a bigger disaster.

The Popular Campaign in the Northern Plains reported that Israeli soldiers are aiding the settlers in their attacks instead of stopping they, and that the army obstructs firefighters and civil defense teams from reaching their destination.

The army did not evacuate the settlers and did not conduct any arrests. Yet, the solders several residents who rushed to the torched lands in order to extinguish the fire.

The attack came only two weeks after the soldiers forced the residents out of the Ein al-Hilwa area as the settlers are planning to install an illegal outpost there.