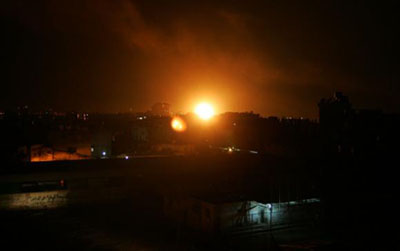 The United Nations reported Sunday that the Israeli siege on Gaza and the aftermath of its December 2008 war are still hindering the reconstruction of the Gaza Strip and that only 25% of Gaza’s damaged buildings and infrastructure have been repaired. According to the UN report, 10 out of 12 Gaza hospitals, attacked by the Israeli army during the war, were repaired, and that 78% of the sewer system was repaired.

The report also stated that international aid for reconstructing Gaza has lead to some development but is still far from enough.

The UN report reveales that most Islamic charity organizations are more efficient in reconstructing Gaza because they use smuggled material.

Among those organizations are the Qatari Red Crescent, The Islamic Relief, al-Rahma Charitable Organization and several other organizations believed to be run by Hamas.

Israel began large-scale military operations in the Gaza Strip on December 27, 2008, and ended on January 18, 2009. At least 1419 Palestinians were killed and thousands were wounded. Most of the casualties were civilians, including women, children, infants and elderly.

At least 6,268 homes were partially or completely damaged in addition to most of Gaza’s streets and infrastructure.