We Will Resist Israel’s Attempts To Stop US 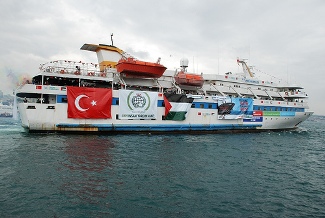 A 2000 ton cargo ship and fifty-person passenger ship owned by the European Campaign Against the Siege of Gaza, and Swedish/Greek Ship to Gaza campaigns left Athens to meet the Freedom Flotilla in international waters.

They follow hot on the trail of the cargo ships of Insani Yardim Vakafi (IHH’s) and Free Gaza’s MV Rachel Corrie. IHH’s remaining 1100 capacity passenger ship and cargo ship are to sail shortly from Turkey.

In Crete, the Free Gaza Movement is readying its two passenger boats for their imminent departure. ‘Al Samoud’ (The Steadfast’) and ‘Al Haya’ (The Ship of Life) were named by children from schools in occupied Gaza and Jerusalem.

Reports coming from the Israeli Navy say they will jam the flotilla’s signals and communications, isolating those on board the ships, and barring the world from witnessing what could become a confrontation or prolonged naval stand-off.

The strategy of the Freedom Flotilla, however, is to resist any attempts by the Israeli Navy to hijack its ships or to divide cargo ships from passenger vessels.

“The message from Israel is clear: ‘We will stop you. And no-one can prevent us from stopping you.’ said Free Gaza chair, Huwaida Arraf.

However, we will non-violently resist Israeli attempts to seize our boats. Thousands of people have contributed to making this flotilla a reality, and the people of Gaza are expecting us.

“We will not allow our flotilla to be divided. We will stay with our cargo ships – they are the core of the flotilla carrying essential construction materials denied entry into Gaza – cement, steel, and houses.

This action is not a symbolic gesture but a concrete intervention to allow the people of Gaza to rebuild their lives with dignity’, emphasized passenger, Aengus O’Snodaigh, TD Sinn Féin party, Ireland

Ewa Jasiewicz added, ‘We are not breaking the law, we are upholding it. We are acting out of necessity to prevent a greater crime from taking place – the collective punishment of 1.5 million people imprisoned in Gaza.

The international community is complicit in this collective punishment and must break its silence. Respect for international law is not optional, it is obligatory.’