Nasrallah: “Israel-bound Ships Will Be Attacked if War Takes Place” 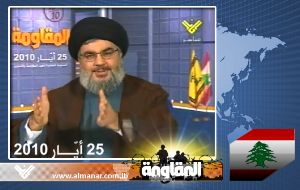 Sheikh Hasan Nasrallah, secretary-general of Lebanon’s Hezbollah party, announced that in the event of war with Israel, all ships sailing to Israel will be attacked by Hezbollah fighters.Nasrallah’s statements came as his party celebrated the tenth anniversary of “Resistance and Liberation Day.” Several religious leaders, military officials and popular figures attended the ceremony.

The Hezbollah leader said that his party stands with the Lebanese government in its desire to avoid war. However, Nasrallah said, he will allow nothing to undermine his party’s capability to defend its country.

Nasrallah added that though Hezbollah does not want war, in the event of one Israelis should be afraid..

“We will tell the Israelis to be afraid of us,’ Nasrallah said on a Hezbollah-run TV station. ‘If the war, which we do not want, yet we are not scared of, broke out, it will change the face of this region – and Clinton agrees with me. We previously said that the Israeli home front has become exposed and vulnerable and we know everything about it, therefore we know where to strike.’

He said that Israel has repeatedly besieged the Lebanese coast, and not only during the 2006 war. Israeli navy ships have previously been deployed in Lebanese waters, according to Nasrallah.

“So today we add the sea to the terrain,’ said Nasrallah. ‘I am not announcing that we possess a new weapon, but in 2006 we destroyed the Saar 5 vessel.”
“What I am saying is that if you besiege our shore and our ports in any coming war, all of your military and commercial ships heading to Palestine will be under the fire of the Islamic Resistance across the Mediterranean. We are talking about the Mediterranean but we have not mentioned the Red Sea yet.’

The Hezbollah leader added that should Israel declare war, ships “will not dare to sail to any port in occupied Palestine,’ but also reassured the fighters will not attack ships leaving the country, even those with Israelis on board.

He emphasized that Lebanon’s resistance will never disarm and will never be intimidated by military power.

“Let us flip the picture around. Let us make Israel afraid and then seek for someone to reassure it. For those who are still calling for disarming the resistance I tell them that this rhetoric is behind our backs because it is useless,” he said. “We shall confront the next war, we shall win and we shall change the face of this region.”

He concluded saying that Hezbollah will protect Lebanon and the will of the people, and that the Lebanese government is working hard to protect its people from any potential dangers.