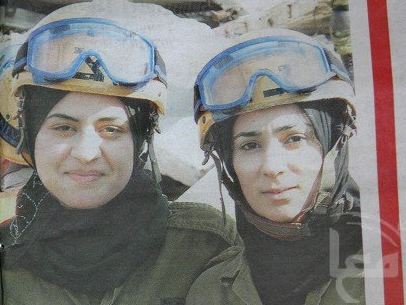 Israeli Ynet news reported that several young women, some wearing a hijab, from Kafar Qassem and Kafar Bara, have enlisted in rescue units under the Israeli Army’s Home Front Command. They will be participating in an upcoming wide-scale Israeli military drill.The drill is expected to be the largest of its kind since the establishment of Israel and will include the Home Front Command and other combat units, as well as the Israeli Navy.

Anwar, Reem, Fatima and Wisal are all Muslim Israeli citizens who live in Kafaw Qassem and Kafar Bara. They have enlisted despite the fact that they come from villages considered to be a stronghold for the Islamic Movement in Israel.

The women serve in and around their villages as members of a Home Front rescue unit. Wearing Israeli military uniforms, some of them wear a hijab beneath their helmets.

Wisal, 32, told the Israeli Yedioth Aharonoth that it is not easy for her to wear the military uniform, especially since she is “a religious woman” who does not wear pants. However, she agreed to wear them in order to be in the rescue unit.

“When I came back home, my kids and husband saw me wearing the uniform,” Wisal said. “They looked at me and expressed respect.’

She added that after she and the other woman became Army volunteers, several other women expressed interest in doing the same.

Reem, 21, a medical student, is another enlistee in the rescue unit who also serves in a hijab. She said she joined the unit to “serve humanity.”

The youngest recruit is Fatima, 16, described as a “smart school student with top grades.” She is finishing high school and preparing to study medicine.

She says that when she has finished medical school she too wants to be in the Israeli military, serving as a medic.

“My mother and father encouraged me”, Fatima said, “they gave me strength, so did my girl friends who saw me wearing the military uniform”.

The young women were recruited by Officer Slaim Wahbe, the head of the Internal Command in the Triangle (al-Muthallath) area north of the country. He first conceived the idea of Arab women serving the in the Army in 2009.

Wahbe says that he “is proud of this achievement,” and said that this is a step in the right direction. He encourages Arab men and women to serve in the Israeli military, though it is the same military that occupies Palestinians in the territories.

Nader Sarsour, the mayor of Kafar Qassem, told Yedioth Aharonoth that when the idea was presented, he insisted that the first recruits should be from his village. Sarsour says that this type to work “protects and serves the residents.”