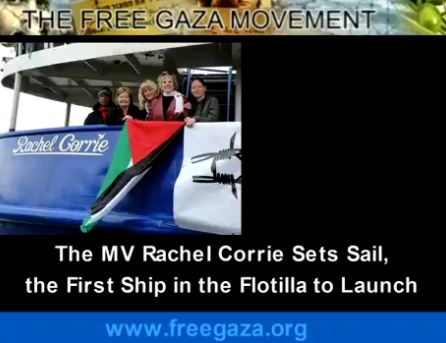 Israeli Foreign Minister, Avigdor Lieberman, stated Friday afternoon that the solidarity ships, filled with medical and humanitarian supplies, and heading to Gaza, is a “violent propaganda against Israel”, and vowed not to allow the ship to reach Gaza. He said that Israel will stop all attempts to break the siege, and added that Israel will not tolerate what he described as “any violations of Israel’s sovereignty”.

Lieberman went to say that there is no humanitarian crisis in the Gaza Strip, and claimed that Israel “is allowing tons of food and equipment into Gaza”.
Meanwhile, the Israeli army and Navy are preparing for a possible takeover of the ships once the ships once they approach the coast.

The activists on the ships created a live link broadcasting live footage from one of the ships while the army vowed to block access to the live feed once the ships approach the Gaza coast.

The Ynet News reported that this issue, according to the army, means taking over the ship secretly.

The Israeli Navy prepared for attacking the ship and conducted drills in this regard. The army claims Israel is concerned “terrorists” might be onboard with the human rights activists to smuggle weapons.

The organizers of the freedom flotilla and the activists onboard, including European legislators and representatives of human rights groups, are on a humanitarian mission and the list of passengers is clear and the supplies they carry are humanitarian.

The Freedom Flotilla is a coalition of organizations from different parts of the world carrying humanitarian supplies to the Gaza Strip.

It stated that people of the global community must take action and challenge the illegal Israeli siege on 1.5 million Palestinians in Gaza, and deliver humanitarian supplies.