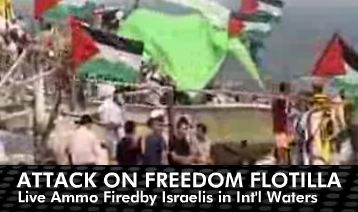 In what activists are calling a ‘massacre on the high seas,’ Israeli commandos assaulted a ship sailing with the humanitarian Freedom Flotilla bound for Gaza. The Israeli commandos roped from a helicopter onto the ship and began shooting, reported Israeli news agencies, leaving 15 dead and at least 30 wounded.Senior Turkish officials held an emergency meeting to decide Turkey’s response to the Israeli attack. The Flotilla is partially led by a Turkish organization and initial reports have indicated that many of the casualties are Turkish.

Sheikh Raed Salah, head of the Islamic Movement in Israel, was also among the wounded on board the Flotilla. Salah’s injuries are serious, Al-Jazeera reported.

The Qatari network managed to broadcast live images of the wounds activists sustained during the Israeli raid.

The Free Gaza Movement announced through Twitter that ‘At about 4:30 am, Israeli commandos dropped from helicopter onto deck of Turkish ship, immediately opened fire on unarmed civilians.’

Israel is still threatening a larger offensive against the humanitarian ships and the activists on board.

The Israeli Army says that they will take the ships to the Ashdod port to confiscate the Flotilla’s cargo and arrest the activists, but the activists on board believe that the Israli Navy is actually taking them to the Haifa port.

Israeli blamed Turkey for the attack and claimed that the Turkish humanitarian aid foundation (IHH) is connected to “terrorist” groups.

The army dropped paratroopers onto the ships and began firing on the activists while the humanitarian Flotilla was still in international waters.

The Israeli Army reported that one soldier was wounded during the attack against the ships, though it remains unclear whether or not he was wounded by friendly fire.

Turkish news networks reported that two ships were boarded. One was raided by the Israeli paratroopers, while the other was seized by the Navy and sailed to Ashdod.

Furthermore, the Ankara reporter of the Al Alam TV said that Turkish officials will hold an urgent meeting to discuss the ramifications of the Israeli attack against the nonviolent human rights activists.

Hundreds of people took to the street in Ankara to protest the attack. The protesters gathered in front of the Israeli consulate to demand that Turkey expel its Israeli ambassador from the country.