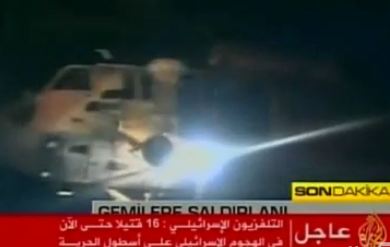 19 activists were killed in the attack and dozens were wounded, Israeli news agencies reported.Among the wounded was Sheikh Raed Salah, leader of the northern branch of the Islamic Movement, who suffered serious wounds. Other notable casualties were the leader of the Lebanese delegation, Hani Suleiman, the Captain of the Turkish ship what was raided, and a Turkish Legislator.

The attack started after the army violently boarded the Marmara and opened fire on the passengers before hundreds of soldiers attacked all ships at once and occupied them.

The ships were in International waters 20 miles away from Gaza waters.
Israel claimed that its soldiers were attacked with knives and batons, and that one of the activists managed to snatch the weapon of one of the soldiers. It also claimed fifteen soldiers were wounded.

The Greek captain of the 800 Ship suffered serious wounds and was moved to an Israeli hospital for treatment. Reports revealed that he is demanding to be moved to his country.

The Israeli army and police declared high alert in all Arab cities fearing massive protests against the attack and against the shooting of Sheikh Raed Salah.
Israel is also weighing the possibility of closing the al-Aqsa Mosque in Jerusalem in front of Muslim worshipers.

Israel is still not allowing the media to enter the make-shift prison in Ashdod where the activists are currently held, and towed the ships to its ports.
The number of casualties could be more than announced due to the ongoing Israeli media blackout.

Meanwhile, Qatar called on the Arab League to convene in order to discuss the Israel attack against the nonviolent activists.

European Union Foreign Policy Chief, Catherine Ashton, demanded an investigation into the deadly Israeli attack and expressed solidarity with the victims and their families.

Turkey said that what happened cannot be repaired and will have a lasting impact on its relation with Israel especially since the vast majority of the slain activists are Turkish.

Hundreds of residents gathered in front of the Turkish embassy on Ankara, chanted slogans against Israel, demanded the government to cut its ties with Israel and carry practical measures against it.

Several leftist groups, and human rights groups, in Greece called for protests in front of the Israeli embassy in the country.

Israeli daily, Haaretz, reported that Turkey had officially recalled its ambassador to Israel.

The al-Jazeera reported that one of the ships is now in Ashdod port, while other ships are still approaching, and added that dozens of fundamentalist Israeli gathered in the area cheering for the Israeli attack and even distributed sweets to “celebrate the attack and the killing of the activists.”

Israel said it will not provide any information regarding the attack and the exact number of casualties until it brings all ships to the port and until its finalizes its statement.

Al-Jazeera said that the bodies of several activists were transferred to an Israeli hospital in Haifa, and that one of the slain activists was shot by a live round in his head.

It in first response the White House said it was “sorry for the casualties” who fell in the attack.

White House spokesperson, William Burton, said that “the U.S deeply regrets the casualties” and that it is still “trying to understand all surrounding circumstances”.