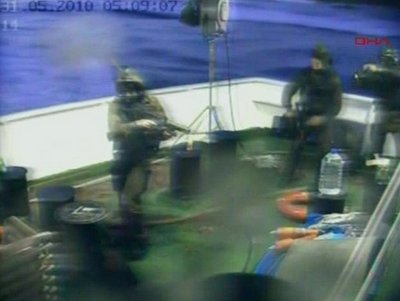 16 hours after the attack on the humanitarian Freedom Flotilla that killed at least 19 passengers, Israeli naval vessels towed the convoy’s ships to the port of Ashdod. The Israeli military has constructed an extemporaneous jail there to hold the activists until they are deported to their counties of origin.16 activists were taken to Israeli prison for refusing to identify themselves. Another 16 were taken for interrogation, though why they specifically were chosen is unknown.

Dozens of others were taken to a hospital for wounds suffered during the Israeli raid. Each of the Flotilla’s six ships was carrying humanitarian aid that had been carefully inspected by Greek and Cypriot authorities. The ships were in international waters when they were attacked by the Israeli military.

Israeli officials tried to make all 700 Flotilla activists to sign orders consenting to their deportation. Only about two dozen of the passengers agreed, according to Israeli media sources. The Israeli government says that it will deport all of the Flotilla’s activists and aid workers, warning that anyone who refuses to cooperate will be imprisoned for an indefinite amount of time.

Among those arrested is Edward Peck, a veteran diplomat who has served as the US Ambassador to Iraq and Mauratania.

Another notable American passenger is Joe Meadors, a retired sailor who was aboard the USS Liberty when Israel attacked it during the Six-Day War.

Also detained are 85-year old Holocaust survivor Hedy Epstein, and Members of Parliament from the EU, Cyprus, Turkey, and Algeria.