The Aftermath: Three days of mourning in Palestine, Israel seals off Gaza 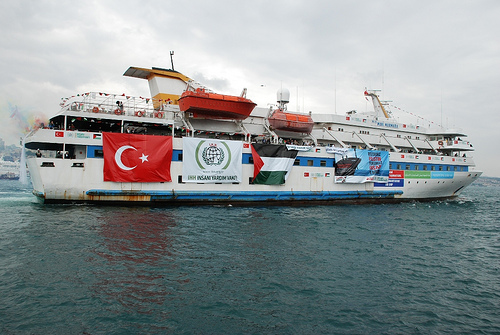 Reactions in the Middle East and around the world to Israel’s violent raid on the humanitarian Freedom Flotilla.Secretary of the Arab League, Amro Mousa: Israel feels it is above the law

Palestinian President Mahmoud Abbas has declared a three-day period of mourning in the Palestinian territories in honor of those killed during the Israeli attack on the Freedom Flotilla headed for Gaza.

Israel has sealed off all entrances to the Gaza Strip.

‘They’ attacked first, says Israel, referring to the passengers’ response as Israeli commandos boarded the ships.

Israeli Prime Minister Benjamin Netanyahu is considering cancelling a planned visit to the United States because of the Flotilla attack.

Ismael Haniyeh, Prime Minister of the deposed government in Gaza, has declared a general strike in Gaza to mourn the victims of the attack.

Thousands of protesters are currently demonstrating outside the Israeli embassy in Ankara, Turkey.

The Turkish Foreign Ministry has summoned the Israeli ambassador in Ankara.

The European Union is demanding an investigation on the attack.

Sheikh Raed Salah, the head of the Islamic Movement in Israel, was among those seriously wounded by the Israeli raid on the Flotilla.