Hamas: “Israel’s Attack on the Solidarity Ships, a Crime Against Humanity” 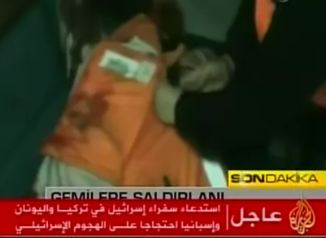 Hamas announced that it is holding Israel responsible for its deadly commando raid on the Freedom Flotilla, which resulted in the death of at least 16 activists. Hamas called the attack a crime against humanity and against the Palestinian people. The European Union and other nations around the world have called for an investigation into the Israeli attack.Hamas called the raid an act of piracy carried out in front of the whole world, saying that theattack is part of the Israeli siege and ongoing aggression.

Hamas called on the International Community and the Arab countries to condemn the Israeli crime, and to prosecute the involved officials and soldiers.

It called for lifting the unjust Israeli siege on Gaza and added that the silence and the lack of action against this siege is complicity.

The European Union called for a comprehensive investigation into the attack against the Freedom Flotilla.

Sheikh Raed Salah, head of the northern branch of the Islamic Movement in 1948 areas, and two others who accompanied him, were among the wounded. Al-Jazeera said that Sheikh Salah is currently undergoing surgery due to his serious wounds.

The Higher Follow-up Committee in the 1948 areas, called for a meeting to discuss measures to be taken in response to the attack. Four of its members, Sheikh Raed Salah, Mohammad Zeidan and Hammad Abu Daabis and Legislator Hanin Zo’by, were on the attacked ship.

The Israeli Authorities declared a state of emergency especially in the Arab areas, mainly in Jerusalem, Jaffa, Wadi Ara and Al Muthallath.

Arab legislator in Israel, Dr. Jamal Zahalka, stated that the attack is an Israeli war crime and an act of piracy headed by “the biggest pirate and war criminal, Benjamin Netanyahu”.

He added that the Israeli army was instructed to stop the Freedom Flotilla by all means, “and now we see what he meant, and what the army did”.

“The army planned to barbarian attack many weeks ago”, Zahalka stated. “They always accused the ships of carrying “terrorists.” This was done too justify their planned crime.”

Israel held a press conference justifying its attack, and said that “it wants to end this issue in a peaceful manner”.

The Foreign Ministry claimed that some of the organizations that participated in the flotilla are “terrorist organizations”, and that they coordinated their efforts with Hamas.

It went on to claim that Israel is defending itself and will do whatever it takes to ensure its security and the security of its people.

The Navy and the Air Force attacked the nonviolent ships while they were in territorial waters and opened fire at the peace activists.

The attack against the nonviolent activists led to protests in several Arab countries and in Turkey.

Syria called for an urgent meeting for the Arab League in order to discuss measures to be taken against the Israeli attack.

In related news, Greece decided to suspend a joint military drill with Israel, and the European Union called for a comprehensive investigations.