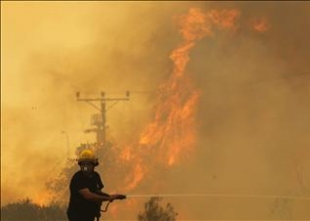 Firefighters continued their efforts to control the fires in Haifa; more firemen were injured due to smoke inhalation while the fires reached Ein Hoad and Nir Tzion areas.The Israeli Police stated that four firemen were moved to Rambam Hospital and that there injuries were described as mild.

The Police added that different fires broke out in Esifya area while more raging fires continue to consume forests between Esifya and the Haifa University.

Reports indicated that the fires west of Esifya are becoming stronger and are reaching Nir Tzion causing heavy damage to property and several homes.

The police had to evacuate homes in Esifya due to the seriousness of the situation.
According to latest casualty statistics, 41 were killed while the bodies of 39 victims were identified.

On Friday evening, the police said two young men from Daliat Al Carmel were released after they were initially arrested on suspicion of setting fire in Al Carmel Mountain.

Also, Jordan and France donated similar materials and equipment, while the Turkish Red Crescent donated 10.000 tents to house the residents who were evacuated from their towns.

Local and International rescue teams are still trying to combat the raging fires in the north, while the latest casualty count stands at 41 dead and dozens wounded. At least 12.000 residents were evacuated from areas close to the fire.