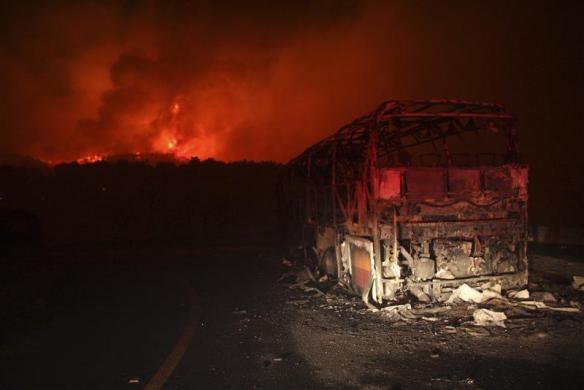 The Al Aqsa Foundation told the Maan News Agency that a group of Jewish extremists torched the Al Qassam Graveyard in Haifa under the guise of the ongoing fires that started Thursday in the area and continues to spread.The Foundation said that there were two attempts to burn the graveyard that includes the grave of Iz Ed Deen Al Qassam, a Syrian nationalist who came to Palestine in 1922 and resided in Al Yajour village in Haifa. He was killed by the British Forces in Palestine in the 1930’s. He is regarded as a symbol of resistance against the occupation in Palestine and the Arab world.

He came for Palestine in February 1922 and resided in Al Yajour village in Haifa. He was known as an Islamic preacher and spiritual leaders. He was also the head of the Young Men Muslim Association In Haifa.

The Al Aqsa Foundation confirmed that two attempts to torch the Al Qassam Graveyard were carried out by extremists, and that Israeli firefighters managed to extinguish them.

There have been several attempts to ruin and burn the graveyard since Palestine fell under Israeli occupation, but Arabs and Muslims reconstructed and fenced it.

An Israeli police spokeswoman denied the report, and told the Maan News Agency that no fires took place at the graveyard.

She said that the fires in the area consumed 34000 Dunams, and that initial reports indicate arson.

So far, 42 persons were killed in the fires and 17 were injured, three of them, including Haifa police chief, are in serious conditions.

Israeli daily, Haaretz, reported that nearly a dozen of fires broke out across the Galilee, north of the country, while wild fires continued to consume more areas in the Carmel. Haaretz said that the police suspect that the new fires were deliberate.

The suspicion rose after the police and investigators found two bicycles and a bag that contained a wig.

The Police arrested and released two Druze residents of Daliat Al Carmel and released them later on after the investigation revealed they had nothing to do with the fire. A number of Israeli investigators stated that they believe the fire was likely caused by negligence.

Furthermore, Haaretz said that the largest fire that broke out on Friday around noon was in Tsur Shalom industrial area on the outskirts of Haifa. The massive density of smoke led the police to temporarily seal a section of Route 4 which links between Acre and the center of the country.

Later on, bushfires broke out in “Ma’alot Tarshiha” and “Kiryat Tivon”, while another small fire broke out east of Shfa Amr Arab city and Neve Yosef neighborhood in Haifa.

On Friday, approximately at 5 in the evening, another bushfire started near a Moshav on the side of the Mount Carmel. Around 6 in the evening, two bushfires broke out in the Nazareth area. Arson is suspected.

Approximately at 8 P.M. on Friday, a fire was reported close to Tel-Al area in the Western Galilee, and another fire broke out in the industrial area of Nesher town, near Haifa.

Israeli Prime Minister, Benjamin Netanyahu, stated that the parties responsible for the fire did not expect an outcome this large, and called for an immediate investigation.

Israeli Interior Minister, Elie Yishai, also called for an investigation into the incident, and stated that he repeatedly warned in the past that Israel’s Firefighting capabilities are the worst in the world, and that Israel is not equipped to deal with urgent situations.

Several countries sent equipment and rescue teams to Israel after Netanyahu urged the international community to help Israel counter this disaster.
Planes and helicopters sent by Greece, Cyprus and Britain landed in Israel on Friday and joined Israeli firefighting planes.

Also, Jordan and France donated similar materials and equipment, while the Turkish Red Crescent donated 10.000 tents to house the residents who were evacuated from their towns.

Local and International rescue teams are still trying to combat the raging fires in the north, while the latest casualty count stands at 41 dead and dozens wounded. At least 12.000 residents were evacuated from areas close to the fire.

Rashif Lev, spokesperson of Israel’s Firefighters Department, said that for the first time since the fires started, a sign of hope appeared in the Carmel after the flames in two main areas, Nir Etzion and north east of Kibbutz Been Oren, were controlled but added that extinguishing them requires more time.