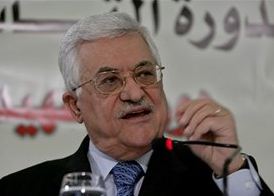 Palestinian President, Mahmoud Abbas, threatened to dissolve the Palestinian Authority and the self-rule government in the occupied territories should Israel fail to stop all of its settlement activities. Abbas added that should the United States stop its support, and fail to be an objective mediator in peace talks, the whole peace process will fail.

During a TV interview with Palestine TV, Abbas said that he cannot accept to remain a president of an authority that does not really exist due to Israel ongoing occupation.

He said that his message to the Israelis is that they can remain in Palestine as occupiers, but this situation will not be acceptable.

The Israeli government of Benjamin Netanyahu and his extremist coalition partners insist on what they describe as “Israel’s rights” to build settlements in occupied East Jerusalem, and refuse to hold talks on the evacuation of settlement blocks in the occupied West Bank.

Israeli soldiers are also conducting daily invasions and attacks against in the Palestinian territories, including in areas that are under Palestinian security control.