Israel Approves The Construction Of 846 Settlement Units In Jerusalem 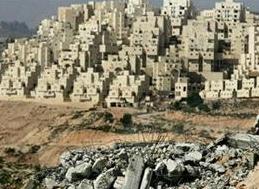 A report prepared and published by the National Bureau For Protecting the Land and Countering Settlements, revealed that the Israeli government approved the construction of 846 units in Jewish settlements in occupied East Jerusalem. The Bureau said that, last week, the Israeli government approved the construction of 130 new units in Gilo settlement, south of Jerusalem, and also started the expansion of a number of settlements north of the city.

Furthermore, the Bureau reported that Israel demolished three Palestinian homes in Jerusalem, and forced a resident to demolish his own home.

During a press release on Sunday, the National Bureau for Countering Settlements said that the Israeli Authorities in the West Bank are ongoing with their assaults against the residents, and that the army confiscated agriculture equipment in Hebron, prevented the farmers from reaching their lands and demolished a number of wells.

Israel insists the Jerusalem is the eternal capital of the country and that “it has the right to build there”.

The Israeli government and the Jerusalem Municipality are ongoing with their assaults against the residents in the city and are demolishing their homes while several Palestinian homes were taken over by extremist settlers.

In related news, the army informed the residents of al-Ma’sara village, near Bethlehem, that a decision was made to demolish the Ibrahim al-Khalid Mosque and two homes in the village.