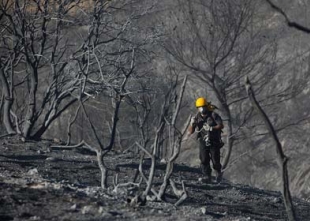 On Sunday evening, after approximately 77 hours of battling the fire, firefighters have finally been able to contain the fires in the Carmel after it consumed 50,000 dunams of land. Death count now stands at 41.After assessing the situation, firefighters have determined that all fires have been contained but decided to remain at the scene to perform final extinguishing operations, Israeli daily Haaretz reported.

Haaretz added that firefighting commissionership operations officer, Boaz Rakia, stated that the populated areas that had to be evacuated are now safe.

In total, 35 firefighting aircraft, including 24 foreign aircraft participated in the effort to extinguish the fire. On Sunday, the American “Evergreen” Boeing 747 Super Tanker, made a final round to put out the last burning flames in the Carmel Mountains.

After officially ordering the halt of the arrival of new firefighting planes, Israeli Prime Minister, Benjamin Netanyahu, said during a meeting with his cabinet that the government is launching a program to rehabilitate the Carmel region.

Several politicians and critics demanded a number of officials to submit their resignation due to their inability to contain the fire that consumed large forest areas, and dozens of homes.

Most of the criticism was directed at Israeli Interior Minister, Elie Yishai, for “failing to ensure that Israel’s firefighting capabilities are good enough to manage a similar crisis”.

On Sunday, Netanyahu held a meeting with his cabinet in Tieret al-Carmel, a town that was badly destroyed by the fire, and vowed to rehabilitate the area as fast as possible.

The cabinet approved a NIS 60 million ($16.5m) urgent assistance for an initial program to rehabilitate the area.

Three Palestinian firefighting trucks and a team of firefighters were sent by President Mahmoud Abbas to help in containing the fire.

Abbas sent his condolences to the families of the victims, who were mainly officers training under the supervision of the Israeli Prison Administration.