Jerusalem Legislator To Be Deported To The West Bank 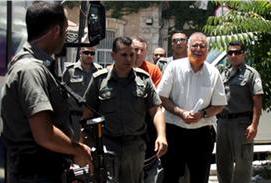 The Jerusalem District Court decided, on Wednesday, to deport detained Jerusalem legislator, affiliated with the Hamas movement, Mohammad Abu Teir, to the West Bank. The ruling is effective immediately, the court ruled.Abu Tier, a resident of Jerusalem, was abducted by the Israeli Army more than five months ago under the pretext of “illegally living in Jerusalem”.

Israel issued deportation orders against Abu Teir along with his fellow elected legislators Ahmad Attoun, Mohammad Totah, and former Jerusalem Minister, Khalid Abu Arafa, under the pretext of illegally residing in the city, and of disloyalty to Israel.

Abu Teir was taken by the army while the rest of the elected Palestinian legislators in Jerusalem reported to the Red Cross building in Jerusalem where they installed their protest tent.

Legislator Ahmad Attoun slammed the deportation of Abu Teir, and stated that the whole case proves that the Israeli judicial system runs under the control of the Israeli Secret Security Apparatus.