Peace Group not Allowed to Operate Stand at Ben-Gurion Airport 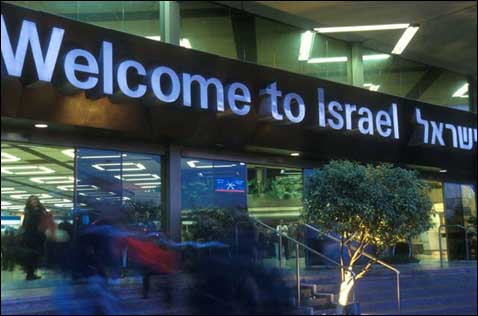 The group Artists Without Walls was denied authorization, on Tuesday, to set up in Ben-Gurion airport a stand run by Jews and Arabs ‘who would be open to dialogue with passengers about coexistence.’, Hareetz reported. Artists Without Walls, a joint Palestinian-Israeli peace group, was rejected its request to run a stand at the passenger terminal at Ben-Gurion International Airport like the one operated by the Chabad movement.

The Israeli representative of Artists Without Walls, Eitan Heller, addressed a letter to Israel Airports Authority saying the stand planned by the peace group would ‘serve free coffee and be managed by Jews and Arabs, who would be open to dialogue with passengers about coexistence and tolerance.’

Heller said having noticed, on his regular journeys abroad, the presence of the Chabad stand, where passersby are asked to put on phylacteries. While claiming to have nothing against Chabad, he stated: ‘But I cannot understand why a specific religious group has its own stand in an open area in an international air terminal,’ he said. ‘This is a phenomenon I have not experienced anywhere else in the world.’

One of the world’s largest and best-known Hasidic movements in Orthodox Judaism, Chabad maintains few thousands of institutions around the world providing outreach and educational activities for Jews.

Ben-Gurion airport manager, Shmuel Kandel, explained in his rejection of the peace group’s request that Chabad provides a service to ‘religious consumers and travelers who want to avail themselves of this service.’ Kandel concluded his response by saying that Chabad ‘is aware of its obligation not to approach passengers, and airport inspectors make sure this is the case.’

‘Artists Without Walls’ is a permanent forum for dialogue between Israelis and Palestinians engaged in all fields of arts and culture, who strive to develop a better and more ‘human’ understanding between the two people through nonviolent and creative actions.