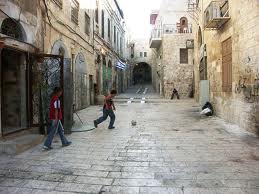 The Jerusalem Municipality is trying to oblige store owners in Arab East Jerusalem neighborhoods to change the language of their store signs into Hebrew, and informed the owners that, unless they do so, their stores will not be licensed and they will have to be shut down.Israeli paper, Maariv, reported Thursday that this decision is effective in all Arab neighborhoods, even those that are not inhibited by any Jewish person.

The new decision pushed the residents and store owners to hold a protest in the city.
Maariv said that Mazin Al Qaq, head of the Merchants Committee in Jerusalem, described the decision as illegal, and added that there are many Arab residents in Jerusalem who do not speak, read or write Hebrew.

“What does the municipality want?” Al Qaq said, “Are they trying to force a sixty-year old person to go back to school to learn Hebrew? This decision is simply illegal and they can’t force anybody to comply”.

Israeli attorney, Yif’at Solel, sent a letter to Jerusalem Mayor, Nir Barkat, demanding him to void the decision as it is illegal and could be voided by any court.