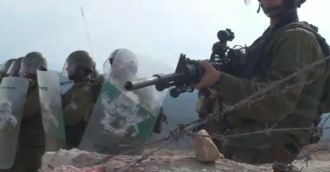 As Palestinian residents of Bil’in village, near Ramallah, accompanied by Israeli and international Peace activists, held their weekly nonviolent protest against the Annexation Wall and settlements, Israeli soldiers violently attacked them and kidnaped two activists. The Friends of Freedom and Justice – Bil’in (FFJ), reported that this week’s protest marked the commemoration of the First Intifada of 1987, the International Human Rights Day, and came to protest the continued imprisonment of Abdullah Abu Rahma, a local leader of the nonviolent movement in the village.

“Bil’in celebrated International Human Rights Day with a larger than normal demonstration through the village. Hundreds of supporters came from outside Bil’in to support the village’s struggle for human rights, to mark the one-year anniversary of Abdullah Abu Rahma’s imprisonment, and to commemorate the First Intifada”, the FFJ reported.

Israeli soldiers immediately attacked the protesters with dozens of gas bombs as the soldiers were lined up on two sides after entering through the gate of the wall and waited for the protestors.

A Palestinian protestor was injured after being struck by a teargas bomb fired by the army while dozens of protestors were treated for the effects of teargas inhalation.

The protestors marched carrying Palestinian flags, and chanted against Israeli settlements and the occupation.

A number of Palestinian politicians including Dr. Mustafa Barghouthi of the Palestinian National Initiative, Hisham Abu Rayya, a leader of the Popular Front for the Liberation of Palestine, participated in the protest.

Moheeb Awad, a Fateh parliamentarian, and several other leaders and members of different factions also participated in the protest.

Similar protests were held in Al Ma’sara village near Bethlehem, and Nabi Saleh and Ni’lin villages near Ramallah, and in several other Palestinian areas.