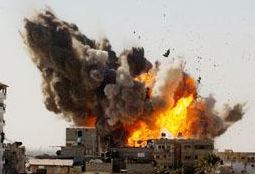 Israeli sources reported that two Palestinians were killed and one Israeli soldier was injured on Saturday at night when a resistance group clashed with Israeli soldiers invading an area inside the Gaza Strip.The army claimed that soldiers spotted two fighters approaching the security fence separating Gaza from Israel before Israeli tanks fired shells at them.

Following the incident, Palestinian fighters fired rounds of live ammunition at Israeli soldiers who invaded the area, and moderately injured one soldier.

Palestinian sources in Gaza reported clashes and explosions, east of the Al Boreij refugee camp, but did report casualties until the time of this report.

Adham Abu Salmiyya, spokesperson of the Emergency Department in the Gaza Strip, stated that Palestinians medics are unable to enter the area to evacuate casualties without an authorization from Israel.

Furthermore, Israeli soldiers opened fire at a number of homes located in the Al Boreij refugee camp, in central Gaza; damage was reported, no injuries.

The army believes that resistance groups in Gaza are trying to step up their activities along border areas, and that resistance fighters are attempting to infiltrate into nearby Israeli military camps and settlements.