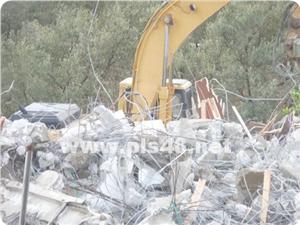 The Israeli Police demolished on Tuesday seven Palestinian homes in Lod city after forcing the residents out. The police claimed the structures were built without obtaining the needed construction permits. Seventy residents were rendered homeless and are currently living in tents. The demolished homes belong to members of Abu Eid family.

The furniture and belongings of the families were taken by the police to a location still unknown to the residents.

The residents demanded the authorities to delay the demolishing of their homes so they can pursue legal action, but the so-called “The Lands Of Israel” Authority rejected their request, and claimed that the land was rented out to the family in 1950, and that the contract had expired.

Local sources reported that the Police prevented local residents from entering the area, and that one of the soldiers cocked this Kalashnikov rifle telling the locals that he is there “to perform his duty”.

“I can only deal with you using this!” the soldier said while pointing his rifle the residents.

His provocation led to clashes between the soldiers and dozens of residents, no injuries were reported.

The Popular Committee in the area held a meeting with the locals and decided to install tents to temporarily house the residents.

Furthermore, the Committee prepared plans to rebuild the demolished structures.