Netanyahu: “Israel Does Not Intend To Compensate Families Of Flotilla Victims” 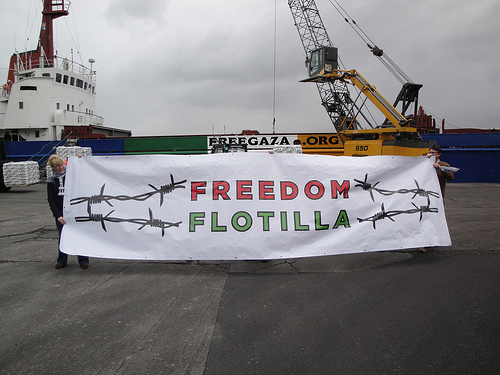 Israeli Prime Minister, Benjamin Netanyahu, denied reports stating that Israel intends to pay compensation to the families of the nine Turkish peace activists who were killed when the Israeli army attacked the Turkish Mavi Marmara solidarity ship that was heading to Gaza to deliver humanitarian supplies. During the attack that took place last May, nine activists were killed and several others were wounded when Israeli commandos commandeered the ship, and towed it to Ashdod port.

During a Monday session with his Likud Party, Netanyahu said that Israel is holding talks with Turkey to drop all charges against the soldiers who took place in the attack, and added that any official apology or compensation will make it easier for Ankara to file lawsuits against the soldiers.

The Israeli Knesset intends to hold a meeting this Wednesday to discuss a Turkish demand of compensation to the families of the victims and an official Israeli apology.

Last Thursday, Turkish Foreign Minister, Ahmit Davutoglu, stated that reports regarding Israel’s intention to compensate the families of the victims are “speculations”, and added that the demands of his country are still the same.

Marmara was part of the Freedom Flotilla solidarity convoy that was sailing to the besieged and impoverished Gaza Strip to deliver medical and humanitarian supplies.