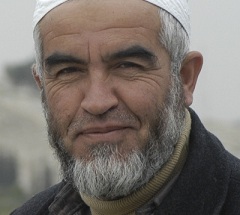 The Israeli Authorities released on Monday the head of the northern branch of the Islamic Movement, Sheikh Raed Salah, after serving a five-month sentence issued against him by an Israeli court.
The Israeli authorities claimed that Salah is responsible for “incitement that led to violent actions in Jerusalem”.

Hundreds of residents, social and religious leaders welcomed Salah and expressed solidarity with him.

It is worth mentioning that Sheikh Salah was onboard the Mavi Marmara Turkish solidarity ship that was heading to Gaza, as part of the Freedom Flotilla, to deliver humanitarian supplies to the besieged Gaza Strip.

The Israeli army attacked the Marmara ship in international waters, killed nine Turkish activists and wounded dozens, before towing the ship to Ashdod part. All detained Turkish and International activists were deported later on.

Sheikh Salah is one of dozens of Arab and Islamic leaders who are subject to harassment and attacks by Israeli policemen and extremist settlers.