Freedom Flotilla 2 To Sail To Gaza Next Spring 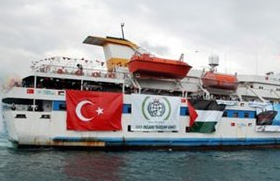 Freedom Flotilla 2 solidarity ships will be sailing to the Gaza Strip next spring in order to challenge Israel’s siege on the Gaza Strip by delivering much needed humanitarian and medical supplies. Flotilla organizers said that the deadly Israeli attack on the Freedom Flotilla on May 31 that left nine Turkish activists dead will not prevent them from breaking the illegal siege.

During a press conference in Rome on Monday, Flotilla organizers said that activists
from twenty countries, mainly from Europe, will be participating in the convoy.

Germano Monte, one of the coordinators of the Freedom Flotilla in Italy, stated that it is essential to receive Italy’s support in order to ensure the safety of the activists and prevent what happened during the Israeli attack on the Freedom Flotilla nearly six months ago.

Monte added that the all governments must practice pressure Israel, and ensure the protection and safety of the activists.

He further stated that the Israeli attack on the Freedom Flotilla was another Israeli violation to the International Law.

Mohammad Hannoun, a founding member of the European Committee Against the Siege, stated that journalists and media agencies will be invited to the ports before the Flotilla sails to Gaza.