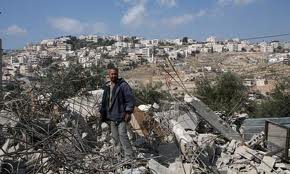 Israeli troops arrested 31 people in overnight raids across the West Bank. Meanwhile, troops demolished two Palestinian homes in East Jerusalem, on Tuesday morning, local sources announced. A 20-year-old university student was arrested in the city of Tubas while he tried to cross a checkpoint to Nablus, and two boys were arrested in Qalqiliya. Another two young Palestinians, identified as Asad Mash’al, aged 17, and Ahmed Nidal Ibrahim Asleem, 15, were arrested during Israeli raids conducted in several houses in the Azoun municipality, in Qalqiliya district.

In addition, Israeli forces arrested Kamal Ahmed Abu Zahra, 23 from Yatta, near Hebron, after searching his house. Further raids took place in the nearby villages of Ithna, al-Dhahiriyya, and Beit Awa.

Palestinian news agency Wafa reported that 31 had been detained overnight although the identities or locations of the other 27 arrestees were not confirmed.

Separate reports claimed that Israeli bulldozers, accompanied by the military, police, and border guard forces, razed two houses, both under construction, in the East Jerusalem neighborhoods of Ras al-Amoud and Sur Bahir neighborhoods, near Silwan.

Clashes between neighborhood residents and soldiers followed the demolition.

The houses were two of approximately 60,000 with demolition orders stating the homes lacked permits, authorized by the Israeli courts on request from the municipality.

International, Israeli and UN groups have pointed out it is nearly impossible for a Palestinian to obtain a construction license in Israeli-controlled areas of East Jerusalem resulting into tens of thousands building without permits.