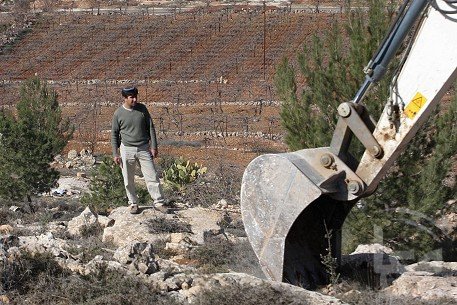 The Israeli Civil Administration officials destroyed five wells and several sheds, on Tuesday, in a small Bedouin community in the south Hebron hills, locals reported.Israeli forces entered the area of Arab al-Ka’abna, under total Israeli military and civil control, which is situated between the villages of at-Tuwani and Umm Lasafa, in the southern part of Hebron, and demolished the water wells.

Representatives from Israel’s Civil Administration did comment on he event.

Ma’an news quoted the village council head saying that five wells were full of water and by noon the demolition of sheds in the area was ongoing. The demolition activity was reportedly carried out because the farmers did not have permits to build the wells. The incident was said to not be the first of this kind to occur, sometimes even within 500 meters of the owners’ homes.

Village council head explained that bedouins in the area survive by raising livestock. Without access to water through the wells, he added, farmers would have to take their flocks and produce elsewhere, ‘making our lands an easy target for settlers.’