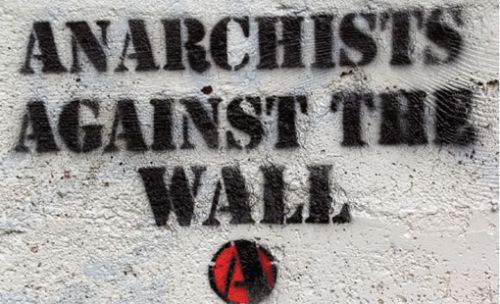 Over the last two days, several Israelis who have participated in anti-Wall demonstrations in the West Bank received calls from Israeli security officers with the Shabak (Shin Bet) intelligence service, summoning them to interrogations.The calls come just one week after a member of the left-wing Israeli group ‘Anarchists Against the Wall’ was interrogated in an Israeli police station in Tel Aviv for his participation in protests against the Wall. The activist, who chose to remain anonymous, said that a Security Officer named ‘Rona’ interrogated him about his politics and political activities. He was later released, and told that his actions would be watched, and that if they ‘became illegal’, the ‘Shabak would be there’, presumably to arrest those involved in the protests.

On Monday and Tuesday of this week, at least three more activists with Anarchists Against the Wall and other Israeli groups reported receiving calls from ‘Rona’ asking them to voluntarily submit to interrogations at Israeli police stations.

Israeli activists who participate in protests in solidarity with Palestinian activists have found themselves under increasing pressure from Israeli authorities in the last two years, with many facing expensive fines and jailtime for protesting the Israeli Wall.

Israeli refusenik Yonatan Shapira, a former Israeli airforce pilot who led a group of pilots in a pledge not to serve in the Occupied Territories, was also summoned by ‘Rona’ of the Shin Bet in July, and interrogated about his participation in the Boycott Divestment and Sanctions (BDS) Movement, which calls for economic and political pressure on Israel to try to get Israel to adhere to international law and signed agreements.

Shapira wrote, “Rona told me that I she knew I was active in the BDS movement and calling for an economic boycott of Israel, and she wanted to know what else do I do as part of these activities. I told her that everything (that I do) is well known and published in the internet and the media, and that I have nothing to add, and that I wasn’t going to talk to her. Rona emphasized that there is a Knesset bill that might soon make my activities illegal. She went on and tried to get me into a political debate, asking if I know that the BDS is in fact a Palestinian organization.”