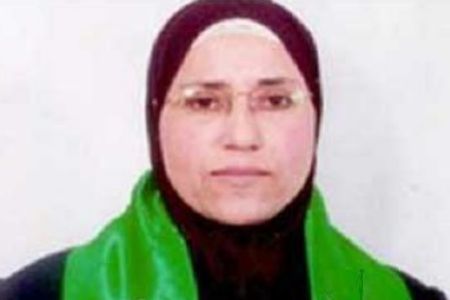 Israeli soldiers raided, on Tuesday, the house of Palestinian MP Halaika in Hebron, the Palestinian Information Center claimed.Hamas lawmaker Samira al-Halaika said Israeli military raided the house at noon on Tuesday in the district of Shuyukh, in Hebron, erected a barrier in front of her house and stopped tens of cars questioning all people inside.

MP Halaika further reported that the Israeli army arrived in four vehicles breaking into her house, and gathered her along with her son Osama. One soldier told Halaika that they came to tell her ‘Happy Eid’, however the lawmaker rejected the wishes replying that it was not Eid and that it was a provocative move.

Last month, Israeli forces raided Halaika’s house overnight, locked up her family members in one room and abducted her eldest son Anas. The Hamas politician warned she would hold Israel responsible for any consequences that might affect her son.

The preventive security of the Ramallah authority summoned, on Monday and Tuesday, hundreds of Palestinians in Hebron including MP Halaika’ s husband on the 23rd anniversary of the founding of Hamas. Her son Anas is still held captive for the 34th day in Jalama interrogation center.

Local sources estimate over 11,500 Palestinians are currently detained in Israeli jails under harsh conditions. Overall, 270 of the detainees are under the age of 18 and 33 of them are women.

According to the Palestinian Ministry of Prisoners, almost half of the 315 prisoners arrested before the Oslo Agreement have been in Israeli jails for more than 20 years.