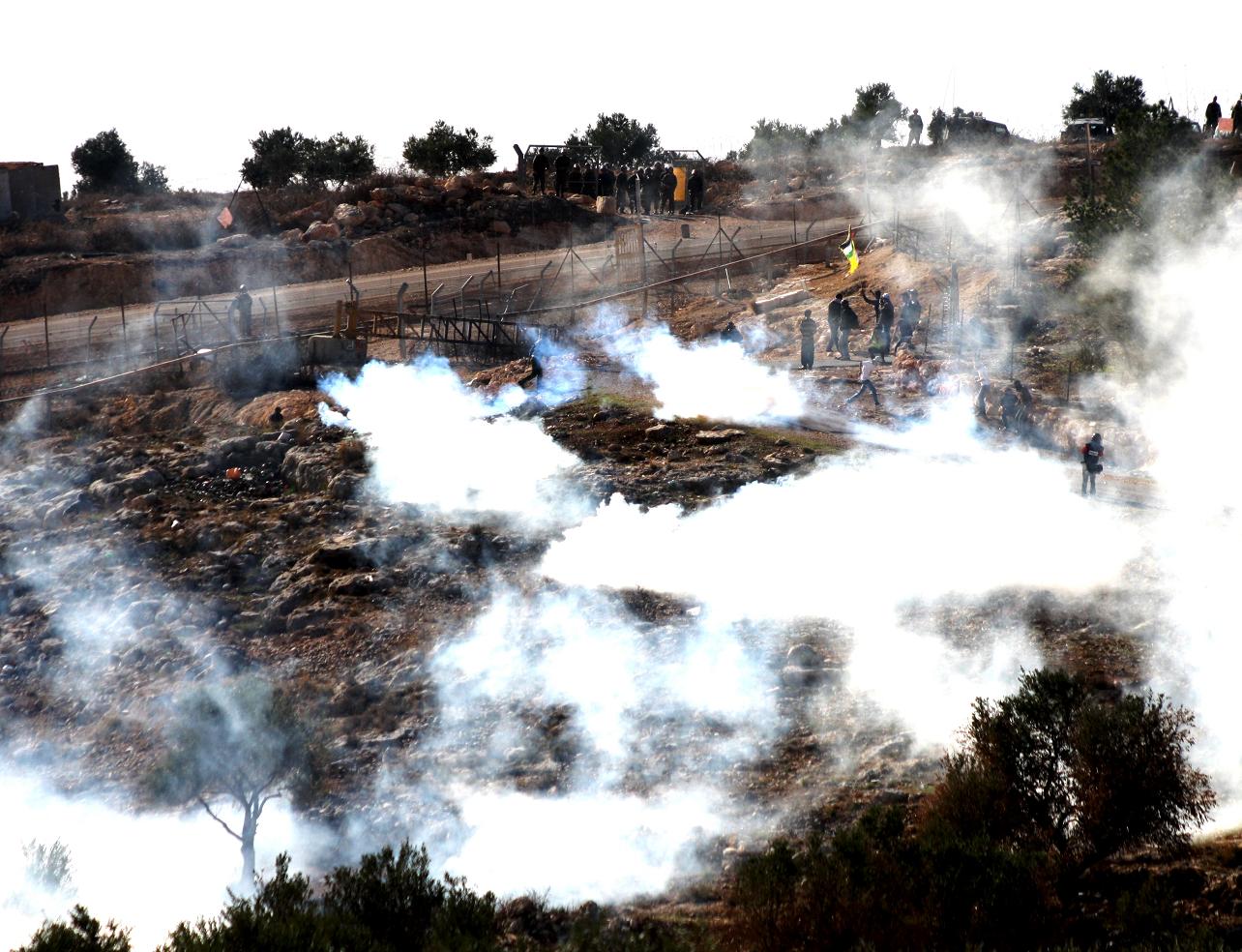 On Friday, dozens of people were treated from the ill effects of tear gas inhalation, as a result of inhaling said gas during the weekly nonviolent protests against the wall in the villages of Bil’in, Nil’in and al-Ma’sara. Also n an-Nabi Saleh, a Palestinian young was injured after being hit in his head with a tear gas canister; no arrests were reported.In Bil’in, like every week after the midday prayer, Israeli and international peace activists joined village residents in the march, organized by the Popular Committee Against the Wall.

The participants chanted national songs and slogans, calling for national unity, freedom for political prisoners, the end of Gaza siege, as well as the end of the Occupation and the construction of the Wall.

Protesters demanded the release of Abdullah Abu Rahma, a local organizer who is in jailed since the beginning of 2010 for organizing the weekly nonviolent actions

They also condemned the daily attacks that Palestinians suffer in Jerusalem and claimed the end of the deportation policy, like recently happened to the Jerusalemite deputy, Mohammad Abu Tir, who was expelled to the West Bank, following his release from prison.

As soon as the crowd reached the fence, which separates the lands owned by the villagers, the Israeli soldiers threw tear gas, sound bombs and rubber bullets in all the directions. As a result, dozens of people were treated for the effects of tear gas inhalation.

In the nearby Nil’in, villagers and protesters marched to the gate of the wall but Israeli soldiers threw tear gas and forced them back to the village.

In an-Nabi Saleh Israeli soldiers closed the village early in the morning and tried to stop supporters from reaching the protest. In addition, the troops attacked protesters before leaving the village.

Rafat al-Barghouthi, in his twenties, was critically injured after being hit on the back of his head with a tear gas canister. He was taken into a hospital in Ramallah, although local sources reported that the Israeli military held the ambulance transporting him for considerable time.

Furthermore, Israeli journalist, Joseph Dana, reported that the Israeli military used live ammunition in their attacks against the non-violent protest.

The Israeli army also stopped demonstrators at the entrance of al-Ma’sara, southern West Bank, where villagers, along with supporters were trying to reach their lands, confiscated to build the wall. Soldiers used tear gas to dispel the protest.