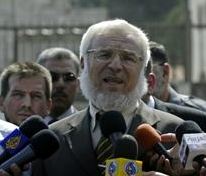 Head of the Palestinian Legislative Council (PLS), Dr. Aziz Dweik of the Hamas movement, called on the Palestinian Authority of Mahmoud Abbas in the West Bank to release all political prisoners in order to create a positive atmosphere for internal unity and reconciliation talks.Dr. Dweik stated that releasing all political prisoners, detained by the Fateh-dominated security forces in the West Bank, is an essential step towards reconciliation.

In statements made to the Quds Press on Friday, Dr. Dweik slammed the statements of a Palestinian security officer who accused the Hamas movement for “using the file of political prisoners to obstruct unity talks”.

He added that “it is unacceptable that Palestinians are being arrested for their political affiliation”, and that political factions have the right to protect their members, and to demand their release.

“If a person is arrested for an felony or a crime he committed, then no one should object”, Dweik said, “But arresting the residents for their political affiliations is not acceptable”.

He claimed that there are hundreds of Hamas members and supporters, and members of other factions, who are currently imprisoned by the security forces in the West Bank, and that one of them is an elderly man who has a serious illness.

“Even Israel released him from its prisons due to the seriousness of his conditions”, Dweik added, “If reconciliation is to be achieved, all political prisoners must be released”, he concluded.