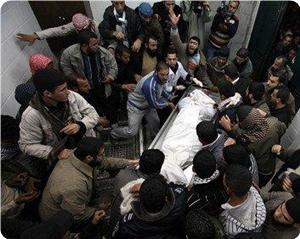 The Israeli Army officially confirmed that its forces carried out the Air Strike that led, on Saturday, to the death of five Palestinians, believed to be resistance fighters. The army said that the Air Force targeted fighters preparing to launch rockets into adjacent Israeli areasThe slain fighters are apparently members of the Al Quds Brigades of the Islamic Jihad and the Popular Resistance Committees.

There were identified as Khalil At-Taweel, Ahmad Al Assar, Ashraf Abu Sabt and Abdullah Al Shareehy, and Ahmas Al Za’lan. All are from Al Nusseirat refugee camp in central Gaza.

According to an army officials, Palestinian fighters fires more than 200 shells into Israeli areas adjacent to the Gaza Strip since the beginning of this year.

Last week, an Israeli soldier was seriously wounded during clashes that took place between Israeli soldiers and Palestinian fighters near a border area in Gaza. The army claimed that a group of fighters were trying to infiltrate into Israel.

Palestinian medical sources in Gaza reported that five Palestinians were killed on Saturday evening during an explosion that took place in Dir Al Balah, in central Gaza.

Adham Abu Salmiyya, spokesperson of the Emergency Department in Gaza, reported that four of the five killed in the explosion were identified as Khalil At-Taweel, Ahmad Al Assar, Ashraf Abu Sabt and Abdullah Al Shareehy.

The bodies of the casualties were moved to Nasser Hospital, in Khan Younis, and to Al Aqsa Martyrs Hospital in Dir Al Balah.

The Palestinian Police and the Security Forces in Gaza initiated a probe into the incident while initial information revealed that the explosion took place due to malfunction in a homemade shell that exploded when a number of fighters were trying to fire shells into adjacent Israeli settlements.

Other sources reported that the explosion might have been caused by a missile fired by the Israeli Air Force as fighters jets were observed flying over the area just before the explosion took place.