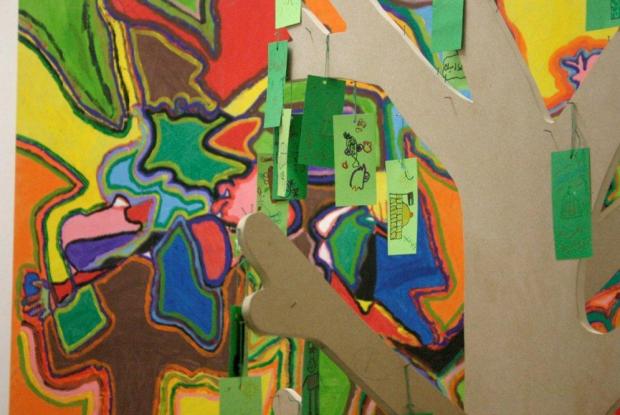 An art exposition shows, in Gaza City, the work of hundred refugee women and children from the coastal enclave, who use the artwork as a way to convey their traumas, the Spanish daily El País echoed. Under the title ‘If you are happy, click your fingers,’ the exhibition shows portraits, murals and a ‘Tree of Dreams’ that have been made by 300 mothers and children from Beit Hanun, Jabalia, Nuseirat and Rafah refugee camps.

The initiative has been leaded by the NGO Creart (Catalonia), with the cooperation of Mundubat (The Basque Country) and Solidaridad International. Using art workshops, the organizers have tried to help Palestinians affected by the Israeli ‘Operation Cast Lead’ offensive on Gaza in the winter of 2008–2009, to transmit their traumas in a creative way.

The war left 1,400 Palestinians dead and decimated Gaza, leaving the inhabitants in a difficult situation to overcome.

According to a member of Creart Chené Gómez, the massacres of those days and the current Israeli blockade in the strip have drastically affected the Gazans psique, especially with regard to children. As a result ‘There are many children with problem to concentrate. It is difficult to draw them a smile,’ he added.

In the opinion of Marta Mercadé, another organizer of the exhibition, the workshops aimed to be part of a creative process to help ‘rebuilding the social fabric and relationships broken during the war, ‘ as well as to develop other skills to face the economical, cultural and humanitarian siege that Gazans suffer in their daily life.