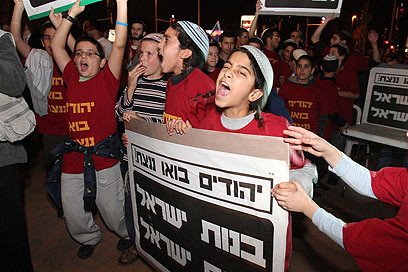 On Monday evening, approximately 200 people gathered in the city of Bat Yam, southern Tel Aviv-Jaffa, to protest against interfaith couples, under the banner ‘We Want a Jewish Bat Yam.’ The Major condemned the event.The demonstrators explained that they wanted to show their concern about the ‘Arabs who are taking our daughters’, referring to the relationships between local Jewish women and Arab men.

During the rally, the speakers remarked that they were ‘just Jews,’ not racist, but the protesters repeatedly insulted Arabs and Islam’s holy figures. One of the demonstrators also exclaimed ‘Any Jewish woman who goes with an Arab should be killed; any Jew who sells his home to an Arab should be killed,’ Israeli new source Ynet quoted.

The rally was also a platform to support the recent letter signed by about 50 municipal rabbis, in which they urged Jewish not to rent apartments to Arabs.

The protest was harshly criticized by human rights associations, left-wing parties and Arab residents, who defined it at as a racist act.

Bat Yam Mayor Shlomo Lahyani strongly condemned the event and those who took part in it and denied the claims of the organizers, who told that the protest was a local initiative.

Lahyani, speaking to Ynet, claimed ‘The city of Bat Yam denounces any racist phenomenon. This is a democratic country with laws,’ and added ‘I am certain and I know that most of the protestors are not Bat Yam residents. This is a foolish attempt to create a provocation, which has failed.’

In addition, about 200 leftists and Arab residents were also gathered in Bat Yam in a counter demonstration, bearing the slogans ‘We’re fed up with racists’ and ‘Jews and Arabs refuse to be enemies’. They also criticized the behavior of police forces, who, in their opinion, did not act when the demonstrators made racist remarks.

According to Ynet, the organization behind the protest is Lehava, which strongly opposes interfaith marriage in Israel. The right-wing activists Itamar Ben-Gvir and Baruch Marzel participated in the rally and claimed that Bat Yam ‘has been taken over by hostile elements and is suffering from assimilation.’

During the past week, several posters were placed on the streets of Bat Yam, calling for the protest: ‘I will not allow them to hit on my sister! What would you do if an Arab hit on your sister? Put an end to it! Recently we have learned of a grave phenomenon: Hundreds of girls from Bat Yam and the center get together with Arabs, they are integrated amongst us, their confidence rising. Put an end to it! Lower their confidence!’

‘Keeping Bat Yam Jewish. Arabs are taking over Bat Yam, buying and renting apartments from Jews, taking and ruining Bat Yam girls! Around 15,000 Jewish girls have been taken to villages! Jews, come on, let’s win,’ was the theme of another poster.