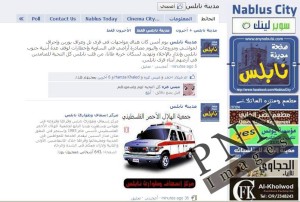 The city of Nablus officially gets a Facebook profile, the PNN reported on Tuesday.The profile on the social network which counts over 500 million users, www.facebook.com/NablusCity, is aimed to connect citizens with local news and encourage locals to post news events online as they see them.

The city’s profile has 49,000 “fans” and offers a directory for local movie times, a poll and a link to another local Nablus page, www.anynabulsi.com.

The website is managed by a group of 22 people, including a photographer, technician, designer, and a number of students.

Hasan Qamhiyeh, a local architect aged 28, designed the Facebook page. He was initially posting photographs of his hometown on the site a few months ago. Later, he decided to create a page intended to invite local news agencies to find and write reports about Nablus, as well as foreigners to learn about the city: people, traditions, dialect, and its acclaimed local sweet ‘knafeh’.